Excellent for Roasting – Very impressive. Great for cooking and very healthy! Each bulb is approximately 5-6 inches across. Elephant Garlic is not a true garlic, but actually a variant of the species to which the garden leek belongs. It has a tall, solid, flowering stalk and broad, flat leaves much like those of the leek, but forms a bulb consisting of very large, garlic-like cloves. The bulbs are very large and can weigh over a pound. A single clove of elephant garlic can be as large as a whole bulb of ordinary garlic. The flavor of these, while not exactly like garlic, is much more similar to garlic than to leeks. The flavor is milder than garlic, and much more palatable to some people than garlic when used raw as in salads.

When cooking with elephant garlic, remember that it is not a substitute for ordinary garlic. Instead it is used where a subtle hint of garlic is wanted without overpowering the rest of the food. Elephant garlic is often served raw in salads or sliced and sauteed in butter (be careful, it browns very quickly and can turn bitter). It’s also frequently used to give a hint of flavor to soups. Garlic also contains chemical compounds that reduce the risk of cancer and heart disease and that help lower blood pressure!

The mature bulb is broken up into cloves which are quite large and with papery skins and these are used for both culinary purposes and propagation. There are also much smaller cloves with a hard shell that occur on the outside of the bulb. These are often ignored, but if they are planted, they will the first year produce a non-flowering plant which has a solid bulb, essentially a single large clove. In their second year, this single clove will break up into many separate cloves. Some people use the young unopened flowering heads as a vegetable. The plant, if left alone, will spread into a clump with many flowering heads. These are often left in flower gardens as an ornamental and to discourage pests. 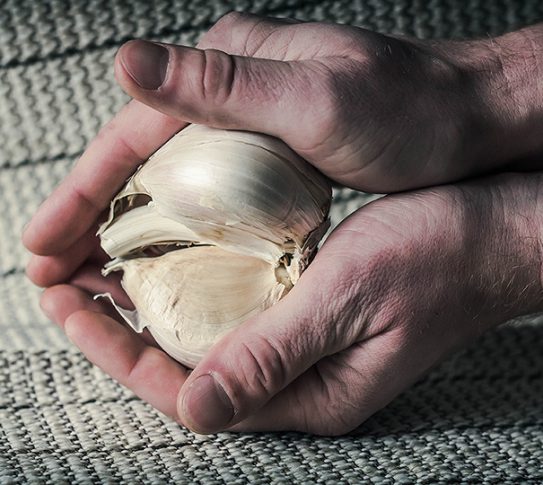 Planting Instructions: 1. Dig a hole 3-4" deep. 2. Set clove, pointed end upward, in a sunny location. 3. Cover with 1" of dirt and fertilize once or twice during the growing season. Plant 6 to 8 inches apart in fall, about 4-6 weeks before the first hard freeze in order to establish roots. Can also be spring planted. It is best to plant garlic in the early spring in light, sandy soil that has been improved with compost or manure. This will permit full leaf development. Later spring planting is not successful. It has been found that long days and warm temperatures favor bulb development in the garlic plant. Gardeners who can grow onions can grow garlic since the culture is similar. Garlic does well with high amounts of fertilizer. The soil must be kept evenly moist as dry soil will cause irregularly shaped bulbs. Heavy clay soils will also create misshaped bulbs and make harvesting difficult. Add organic matter, such as well-rotted manure or compost to the soil on a yearly basis to keep it crumbly. Average Water Needs; Water regularly; do not overwater.