‘Duchess of Edinburgh’ has spectacular, double white 4-6″ flowers that are very fluffy and rosette shaped. Early flowers may be touched with green. This vine grows best in a fertile, well-drained, alkaline soil. A choice site is key to the success of establishing this perennial; roots should be kept cool and moist. Attracts Butterflies. ‘Duchess of Edinburgh’ can either be grown in a garden planting or is suitable for container gardening. Excellent for walls, arbors, pergolas, trellises and poles. Its effect is quite spectacular when grown against a dark background. Repeat bloomers; prune immediately after flowering. During summer single flowers are produced on new growth. It thrives best in full sun.

Pruning Group 2 – Early to midseason flowering cultivars and rebloomers. These varieties begin to bloom in early summer, with the first flush of flowers appearing on the previous year’s growth. This is followed by a second flush flowers appearing on the new growth. These flowers will likely be smaller than the first ones and flowers that were double the first time may be single the second time. The time to prune this group is in late winter or early spring. Dead and weak shoots should be removed and the remaining shoots cut back to 6-9 inches above a couple of well-developed buds.

Clematis is a genus of over 250 species, most of which are woody to semi-woody deciduous vines climbing by twining leaf stalks or in some cases trailing over support, but in a few cases grow as freestanding or sprawling herbaceous perennials and small deciduous or evergreen shrubs. Most have flat, cupped or bell-shaped flowers. Some plants feature ornamental fluffy seed heads in autumn. Plants bear opposite, simple to compound leaves which are usually deciduous but sometimes evergreen. Compound leaves range from lobed to trifoliate to biternate to pinnate to bipinnate. Clematis is native to both the Northern and Southern Hemispheres including Europe, the Himalayas, China, Australasia, North America and Central America. 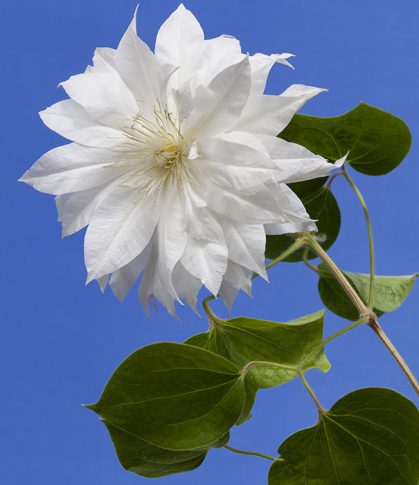 General Characteristics: Clematis may be planted and trained to cover walls, trellis, posts, fences, arbors or to cover rocky sites. It will need support. Prefers a rich, well-drained soil with a pH of 5.6-6.5. Clematis do best in neutral or slightly alkaline soils, but they are somewhat adaptable. If you have very acid soil, try to add some calcium when you plant. If you want to grow really good clematis you should incorporate a little lime in the planting holes. Roots should be planted in a cool moist environment, while the vine itself should be in the sun. Root area should be protected. They require 1" of water a week. Lovely, healthy, dark green foliage.

Clematis Repeat Blooming: GROUP 2: These are early double and semi-double mid-season cultivars. They bloom mid June and if healthy they will bloom again around September in a smaller show of color. These bloom on the new growth that is produced from old buds produced on stems from the previous season. If they are pruned to the ground, they will bloom, but will miss the big and beautiful early flower period. Remove dead and weak stems in February or March, leaving the best of last year's buds. Once they finish blooming, cut the plant back to 16" to encourage new growth for fall flowering.

Planting Instructions: Dig a hole large enough to encompass the roots without bending or circling. Set the plant in place so the crown (part of the plant where the root meets the stem) is about 1-2 inches below the soil surface. Cover with soil to the original soil surface and water thoroughly. Plant in the spring, when the soil is workable.